The starting point of Géraldine Singy’s artworks is her discussion with soft and hard materials and with objects or their visible shells.

The objects that interest her, pieces of furniture and clothing, are mostly taken from her immediate residential sphere. A table changes into a multi-part sculpture from light fabric printed with the summery motif of a beach hut. A small stool is disassembled into its individual parts – made from PVC floor covering with imitation wood grain – and now lies newly assembled, with its stability broken, however, on the ground, its four legs stretching out from itself. It is animated but also lifeless, like a dead animal. Occasionally the objects grow into room – size or wall-hugging installations, taking on anthropomorphic qualities. They behave like actors in a masquerade, wearing new garments that influence their behavior. A small rocking chair seems to have disassembled itself into its component parts ; however, a sort of metamor- phosis has also taken place in its mating with a handbag. These hybrid objects, individual things chosen frome the codes or a designer’s plans and made from strange or wrong materials, raise doubts in the viewer regarding
his or her perception of the stability and safety of their surroundings. 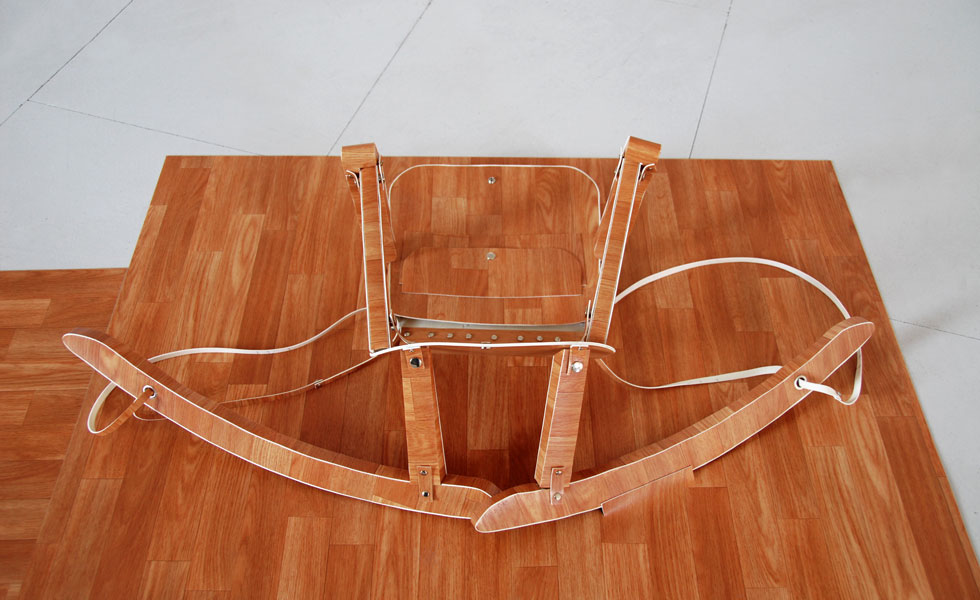